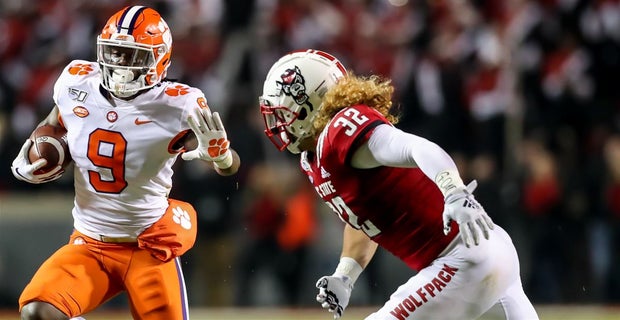 rying to pick out the ACC’s 10 best players entering the 2022 college football season is an extreme challenge, considering how much talent is within the conference. Additionally, several players might be poised for surprise breakout seasons this fall.

To make this group, you have to be a proven commodity — or at least a player who showed during the 2021 season that with more reps this fall, the numbers should flourish.

It’s important to note this group includes players who have displayed expansive talents on the field for an extended period in recent seasons. While new Pittsburgh quarterback Kedon Slovis has shown the potential to be a great quarterback in the past, his inconsistency and injury issues last fall kept him off the list ahead of the 2022 season.

Here’s a look at the ACC’s 10 best players exiting spring practice ahead of the 2022 season:

Thomas has already proven himself to be one of the most disruptive defenders in the ACC. Last season, Thomas piled up 13.5 tackles for loss and 6.0 sacks. In his career with the Wolfpack, Thomas has 191 total tackles with 27.0 tackles for loss and 11.5 sacks. He was a big reason why NC State gave up just 19.7 points per game last season, which ranked 14th in the country. With another big season this fall, Thomas could really draw the attention of NFL scouts leading up to the 2023 draft.

The ACC’s leading rusher in 2021, Tucker enters his junior season with high expectations. Tucker had the second-biggest workload in the conference last fall with 246 attempts, and he made the most of it with 1,496 yards, which was good for 6.1 yards per carry. Tucker was the model of consistency last fall. He topped 100 yards in nine games, and he cracked the 200-yard mark in a win over Boston College. Tucker should be able to run roughshod over ACC defenses again this year.

Throughout his time with the Cardinals, Abdullah has steadily grown into one of the best defenders in the ACC. In his first three seasons, Abdullah compiled a total of 11.0 tackles for loss and 4.0 sacks. Those numbers were roughly doubled in 2021 when Abdullah exploded for 16.5 tackles for loss and 10.0 sacks. Abdullah chose to come back for a fifth season with the Cardinals, and that is very bad news for all the offenses on their schedule this year.

After an impressive 9-3 season in 2021, Leary chose to return to NC State for another run at an ACC Championship. Leary took his game to another level last fall as he completed 65.7% of his passes for 3,433 yards, 35 touchdowns, and five interceptions. Each of those numbers ranked in the top five of ACC quarterbacks. With Leary behind center for the 2022 season, the Wolfpack are a contender to win their division, and he will have the opportunity to assert himself as one of the best prospects in the 2023 NFL Draft class.

The Cavaliers boasted one of the most entertaining offenses in the country last year, and Armstrong returns to run it back one more time. Virginia leaned heavily on Armstrong, and he rose to the occasion. He completed 65.2% of his 500 passes for 4,449 yards, 31 touchdowns, and 10 interceptions. With former Clemson offensive coordinator Tony Elliott taking over as the Cavaliers’ new head coach, Armstrong will have to adapt to a new scheme. That might take some time, but Armstrong has shown he has the ability to make big plays in a variety of ways.

A torn ACL ended Clark’s 2021 season abruptly, but he was still tied for the ACC lead in passes defended with 12. If it hadn’t been for that knee injury, Clark might have even gone to the 2022 NFL Draft, but he elected to come back this year to prove to scouts that he has returned to full speed. Coming out of high school, Clark enrolled at Liberty as an under-the-radar recruit. He transferred to the Cardinals ahead of the 2020 season and blew up from there. In the last two seasons, Clark has totaled 23 passes defended, 5.5 tackles for loss, and four interceptions.

In the first two seasons of his Wake Forest career, Perry totaled 19 catches for 273 yards and two touchdowns. Perry blew those numbers out of the water in 2021 as he became a legitimate big-play threat. He caught 71 passes for 1,293 yards and 15 touchdowns, and his mark of 18.2 yards per reception was fourth among the conference’s top receivers. With Sam Hartman back to quarterback the Wake Forest offense in 2022, more big things could be in store from Perry as he tries to lead the Demon Deacons back to the ACC title game.

A former four-star recruit in the 2020 signing class, Van Dyke took over as the Hurricanes’ starter just a few games into the 2021 season. While it took a couple of games for him to settle in, Van Dyke really came into his own over the latter half of the season. Van Dyke finished the season with 2,931 passing yards, 25 touchdowns, and six interceptions while completing 62.3% of his passes. While there have been some big changes at Miami this offseason, Van Dyke will be back to begin the Mario Cristobal era. If he can build on his strong 2021 season, the Hurricanes will be a dangerous team.

Whoever wins the starting quarterback job at North Carolina this fall will have an elite weapon around him in the form of Downs. In his redshirt-freshman season last fall, Downs led the ACC with 101 receptions. His 1,335 receiving yards were second in the conference behind Biletnikoff winner Jordan Addison. Sam Howell won’t be throwing him the ball in 2022, but Downs should still be highly productive. With another big year, Downs might be able to cement himself as one of the top receivers in the 2023 NFL Draft.

Murphy was the No. 7 overall recruit in the 2020 signing class, according to the 247Sports Composite rankings. Through two seasons at Clemson, Murphy has more than lived up to that billing. As a true freshman, Murphy tallied 10.5 tackles for loss and 4.0 sacks. Last year, Murphy built on those numbers with 14.5 tackles for loss and 8.0 sacks. Clemson’s defense carried the team for much of the 2021 season, and Murphy was a big part of that. Even with long-time defensive coordinator Brent Venables leaving for Oklahoma, the Tigers remain in good hands with Murphy getting after the opposing quarterback every week.