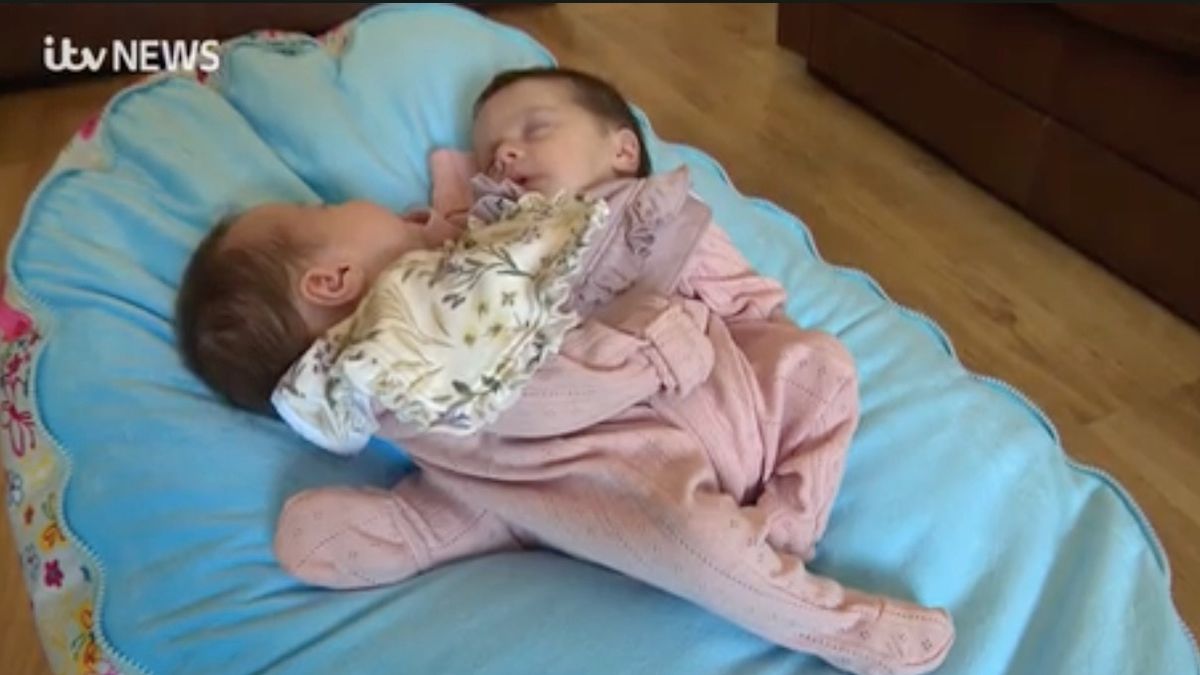 A British couple have welcomed their “miracle” conjoined twins who constantly hug one another.

Hannah and Dan Bateson welcomed their beloved babies into the world after a difficult nine months.

Annabelle and Isabelle were born last month after a rollercoaster pregnancy.

The couple turned to fertility treatment last year to help them conceive and were over the moon when Mrs Bateson fell pregnant on the first cycle.

But an early scan gave the couple a scare after it revealed the twins were conjoined, something that only happens in one in every 2.5million pregnancies.

Doctors knew from early on that the girls shared several body parts but they could not tell if any vital organs were affected.
Hannah and Dan Bateson with their new born twins Annabelle and Isabelle

This is a key factor for their survival and long term health and wellbeing.

Speaking to ITV News, Mrs Bateson said: “You felt in limbo because we knew they were conjoined but we knew so little about the information about the extent of the conjoin.”
Give It LoveGirl Gives Garbage Man Cupcake Every Week Until Dad Follows Him And Sees Why
EsquireRare and Mesmerizing Photos of the Brat Pack

Even as the due date grew closer and closer the couple were still in the dark about the girls’ condition and how they would be during birth.
Annabelle and Isabelle

They were referred to London’s University College Hospital so a specialist team could deliver the twins.

Annabelle and Isabelle were born safely, and were joined from the chest to the pelvis, and they shared a bladder, bowel and a fused leg.

Mrs Bateson said: “They’re miracles. Miracle is the word we’ve used from the day we found out we were having them.”
Annabelle and Isabelle

Due to how they’re conjoined, the two twins “constantly hug each other”.

But after their miracle birth, the family is now readying themselves for the next challenged, the surgery which will begin the process of separating them, which is scheduled for next month.

Mrs Bateson said: “Their wee bodies are different. The girls will have prosthetic legs, they’ll have one leg each and a prosthetic leg each.”

Annabelle and Isabelle will require multiple surgeries all the way into their teenage years but their parents say they are determined to give both tots a healthy life.

Ordinarily, twins are born after a single fertilised egg splits and develops into two separate embryos.

This often occurs eight to 12 days after conception, and the embryos become each twin entirely.

But in the case of conjoined twins, it is believed that the split happens much later, meaning the embryos do not fully separate.