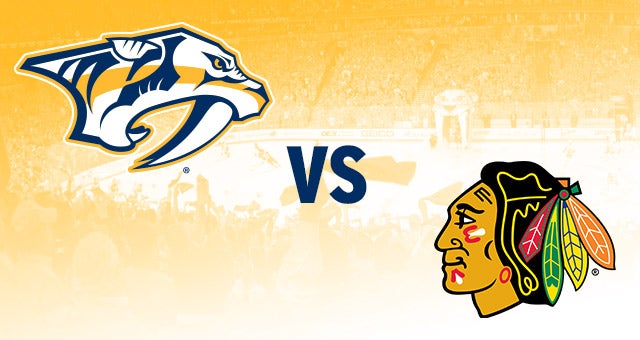 The Nashville Predators enter Saturday in possession of one of two Western Conference wild-card playoff spots, although that previously iron grip has become a tenuous one.

Nashville (42-27-5, 89 points) has lost three of four as the Chicago Blackhawks come to town for a Saturday matinee.

On Thursday, the Predators were blanked 4-0 by the Edmonton Oilers, the club’s first shutout loss since Dec. 2. Two weeks ago, Nashville was five points ahead of Dallas — now they’re tied — and four points clear of Vegas, which is now just two points behind the Preds.

“Mentally, physically and emotionally, we have an opportunity to regroup here, and we have to respond,” Predators coach John Hynes said. “So I’m anxious to get back with our group and get some things figured out. I’m really looking forward to seeing our team respond on Saturday.”

Oilers star Leon Draisaitl erupted for a hat trick, while the Predators were unable to solve Edmonton goaltender Mike Smith, who made 30 saves.

“I thought we were too flat on our side,” Predators defenseman Mattias Ekholm said. “They came out and had a mission out there. We didn’t catch up to it in the first. We got out of that one with just a one-goal deficit, thanks to (Predators goalie Juuse Saros). It seemed like we had some instances here and there in the second and third where we had some energy. But overall, I thought we need to be better.”

Chicago stopped an eight-game skid Thursday, topping the San Jose Sharks 5-4 in a shootout to salvage a victory from a five-game homestand and win for the first time since March 24.

The Blackhawks (25-38-11, 61 points) close the regular season by playing five of eight away from the United Center but are optimistic about staying afloat down the stretch.

One reason? Coach Derek King has re-established the team’s longstanding top line of Patrick Kane, Dylan Strome and Alex DeBrincat. On Thursday, each member of the trio excelled, with Kane contributing a goal and two assists, Strome registering a goal and an assist and DeBrincat assisting on three goals before getting the only tally of the shootout.

“We try different things. They were a little dry there when I split them up and just thought they were cheating the game a little bit, always looking for each other,” King said.

“Obviously that’s what they do, but we just thought we’d spread the wealth a little bit. But it wasn’t paying off, so (I) swallowed my pride and was like, ‘All right, you guys can go back together.’ But they were good tonight. That’s what they do, right?”

Kane has six points in his last three games.

“We put together a better performance than we had lately,” Kane said. “It felt like a game that meant something tonight.”

Slumping Dominik Kubalik, who has one goal in his past 15 games, has been a healthy scratch for the Blackhawks for the past three games.

Nashville leads the season series 2-1. The teams played a pair of overtime games before the Predators romped to a 6-1 win on Jan. 1.