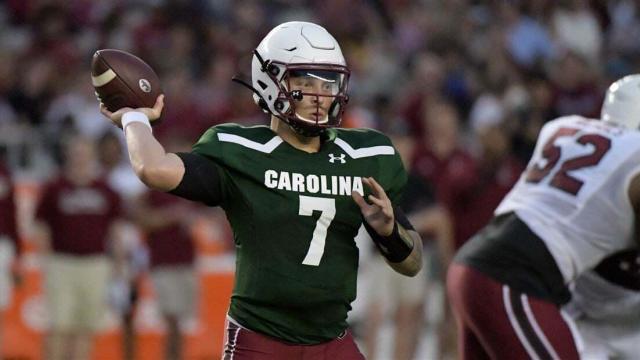 The raw amount of talented quarterbacks that hit the transfer portal in the aftermath of the 2021 season was a little staggering. It will undoubtedly lead to a fascinating 2022 campaign with big-name stars on new teams with huge goals. New USC coach Lincoln Riley adding ex-Oklahoma QB Caleb Williams was the headliner, but Texas landing five-star Quinn Ewers was another bombshell.

“I think in Quinn we see so much of just the raw talent,” Texas coach Steve Sarkisian said about his five-star Ohio State transfer. “The raw arm strength, the different arm angles. But what I will say about Quinn, he’s very coachable. And he’s a guy that, when we work on something and then he goes out and does it and maybe does it right, (and if not) we watch the tape, he gets it fixed the next time out.

Get the fastest scores, stats, news, LIVE videos, and more. CLICK HERE to download the CBS Sports Mobile App and get the latest on your team today.

247Sports’ Josh Pate broke down which prized transfer quarterbacks he thinks could thrive in 2022 on the latest episode of The Late Kick:
JT Daniels, West Virginia

Injuries have gotten in the way of former five-star quarterback JT Daniels really showcasing his full repertoire. But the former Georgia and USC quarterback is hoping to show his magic at West Virginia. It’s a chance for Daniels to reunite with West Virginia offensive coordinator Graham Harrell, who was previously at USC.

“It’s very intoxicating when you see the best of JT Daniels,” Pate said. “When you watch highlight film of JT Daniels, no one is questioning his upside. It’s the consistency of performance and if he can perform at a consistently high enough level. That’s the great unknown for West Virginia football.”

LSU transfer Max Johnson started all 12 games for the Tigers last season after appearing in six games with two starts during the 2020 campaign. Johnson ended the 2021 season completing 60.3% of his passes en route to racking up 2,814 yards with 27 touchdowns against six interceptions. But he still has to beat out Haynes King and Conner Weigman for the starting quarterback gig.

“There is some semi-smart money in College Station, exiting spring that would lead you to believe that maybe he’s the favorite to win the job,” Pate said of Johnson. “That’s not remotely settled. Max Johnson is the kind of guy who is a player you can win with. It’s not just cluttering up the quarterback room so you can have decent depth. That’s a guy you can win with. We’ve already seen him win in this division, no less.”

Playing in Lane Kiffin’s quarterback-friendly scheme is extremely attractive and one of the big reasons why Ole Miss landed USC transfer Jaxson Dart. But Kiffin isn’t going to just hand the former top-100 prospect the gig. But Dart has all the tools to be one of the breakout newcomers in the SEC in 2022.

“At the end of spring this was not a settled quarterback race,” Pate said. “[Dart] and Luke Altmyer are still tangled up in a legitimate battle. I think it’ll be Jaxson Dart. We are overlooking one of the biggest transfers in America this past cycle. It’s not Jaxson Dart. I’m telling you that TCU transfer running back Zach Evans is being overlooked. Zach Evans could be the best tailback in the SEC and I’ve heard nary a person talking about him as of late.”

As a five-star true freshman last season, Caleb Williams stepped in and was an instant boost to the Oklahoma offense, so much so that Lincoln Riley made him a transfer priority when he left for the USC vacancy. Equipped with talented transfer pass-catchers on the outside, this USC offense should be high-powered this season and Williams already has the necessary starpower as a well-known face amongst other quarterbacks. Add in the fact he’s now in the West Coast spotlight for a program potentially on the rise and all the ingredients are there for a legitimate Heisman threat.

“What would USC football be if (Lincoln Riley) did not bring along Caleb Williams,” Pate said. “Far be it for me to suggest they were a package deal. We all know how dirty of an allegation that is. But Caleb Williams obviously is a big-time player here. He was the No. 1 overall player in the transfer portal.”

Oklahoma’s new starting quarterback following the departures of former five-star Caleb Williams and Spencer Rattler to the transfer portal, UCF transfer Dillon Gabriel will try to put up prolific numbers for the Sooners under the direction of new offensive coordinator Jeff Lebby. Gabriel posted gaudy numbers over a three-year career in Orlando, peaking in 2020 with 3,570 yards passing with 32 touchdowns against four interceptions. He played in just three games last season after breaking his collarbone against Louisville in October and completed 68.6% of his passes for 818 yards and nine touchdowns with three picks. Gabriel originally announced he was transferring to UCLA but he pivoted to Oklahoma.

“That transfer nationally is one of the biggest transfers in the sport this past cycle,” Pate said. “If Dillon Gabriel is not at Oklahoma, what is Oklahoma football this year? They swung and missed on Jaxson Dart. Maybe they would’ve landed Dart if they didn’t have Gabriel. But my point is he’s one of the most important players and that position is one of the biggest boom-or-bust positions for contending teams. There is a lot of weight on his shoulders here and I look forward to watching him play. I also look forward to watching what kind of style they use at Oklahoma.”

Spencer Rattler transferred to the Gamecocks in December from Oklahoma and was actually the odds-on favorite to win the Heisman during the preseason ahead of his sophomore season. He lost his job to Caleb Williams and never seemed to get back in the good graces of then-Oklahoma coach Lincoln Riley thereafter. But Rattler clearly is very talented. The arm talent Rattler possesses is off the charts, and he is one of the highest-rated quarterbacks in South Carolina history.

Quinn Ewers — a former five-star, rated as the nation’s top player in the 2021 class, according to the 247Sports Composite — has not been named the Longhorns’ starting quarterback just yet, but his performance in Texas’ recent spring game made waves nationally. Ewers reclassified and enrolled at Ohio State early last year before announcing his transfer to Texas in December. Ewers has battled with Hudson Card, who began last season as the starter, throughout spring in Austin to determine 2022’s starting quarterback.

“Barring something unforeseen, Quinn Ewers is going to be the starting quarterback for Texas. This could be the difference in several games this fall for Texas. That will be a must-watch team every week if Quinn Ewers is the quarterback for Texas because he’s got a guy calling plays for him that I thought was the best coordinator in college football when he was at Alabama. [Steve Sarkisian] still may be the best play-caller in college football. Just has to have the ingredients and he’s getting more and more of them.”