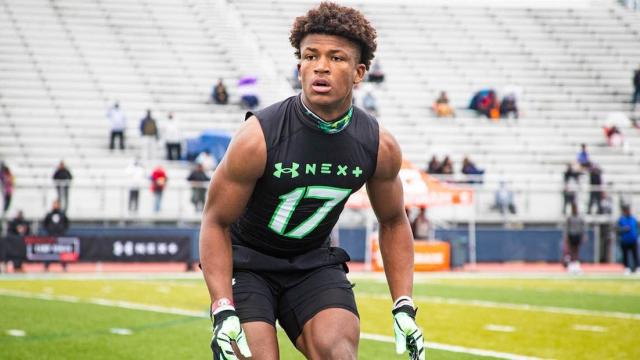 During the week the alarm goes off at 5:25 every day, about 35 minutes earlier than the Top247’s No. 1 ranked safety Caleb Downs would actually need to rise to get where he needs to be that day, which is typically a morning lifting session.

“If you listen to a lot of people that have succeeded and what they’ve done, most of them get up earlier than that,” the Hoschton (Ga.) Mill Creek standout told 247Sports. “I have to start off somewhere.”

So with that, Downs day begins. He’ll put on a sermon, listen to gospel music and turn on a motivational speaker, with his two favorites right now being Eric Thomas or Les Brown. His pursuit of self-mastery drives him beyond the football field (including a 3.9 GPA) and has also put him in position to attend the likes of Alabama, Georgia, Notre Dame and Ohio State, the four schools he’ll take an official visit to in June.

“He is conscientious,” Downs father Gary said. “He observes everything. He doesn’t want to just do well in school and sports, he wants to do well in life. I’m talking from a social standpoint and a spiritual standpoint. He wants success.”

When 247Sports talks to college coaches behind the scenes about what makes the five-star Downs so impressive, perhaps the film is so remarkable it just goes without saying, because the conversation typically begins with the way he’s wired. Downs demeanor and his presence are traits that are just as exciting as his instincts, speed and quickness, ball skills and open-field tackling abilities.

“His desire for growth,” Mill Creek head coach Josh Lovelady said. “What I mean for that, as a teenager at his age, on and off the field, his desire for growth is nothing I’ve seen in 26 years. Everybody wants to be this, but whenever, with us, the why, from ninth grade on, he didn’t all of a sudden flip a switch, he’s always wanted to know more and know the why for what we’re doing. The scheme, he loves the chess match of the game, and you hear the conversations, you talk to any college coach, we have conversations I’m trying to get out of juniors in college that’s in our system.”

“He’s very attentive and kind hearted,” Downs mother Tanya said. “He has always acted more mature. I guess having an older brother (Josh is one of the best receivers in college football shining at North Carolina) and sister (Kameron played soccer at Kennesaw State and is preparing to be admitted into medical school with aspirations to be an orthopedic surgeon) he was always more mature. He’s worked hard. Even if some of his friends were doing some things and he felt he needed to do something else that meant more to his goal at the time he would do that. He’s a leader. He’s there when his teammates are down to pick them up. He’s like a coach, he’s always been like that.”

The now 6-foot, 190-pound Downs has always been a star on the football field.

“When he was four-years old in preschool one of his teachers told me Caleb is doing one-armed pushups for the girls,” Gary laughed. A seven-year pro, the elder Downs played his college football at N.C. State where he was one of the best running backs in school history and was also an academic honoree by the ACC Conference. “He could dribble and shoot a basketball at three-years old. He’s always been like that. When he was six-years old, his first year playing football he scored 46 touchdowns. He didn’t get tackled for like four or five games. Literally you’re watching these games and thinking is this real. Not getting tackled and making almost every tackle. It’s like clockwork and he did the same thing in basketball. Josh his older brother said it will get harder when you’re older and it got a little harder but it’s pretty much been the same level of dominance since day one.”

“I think one of the parents when he was six, they nicknamed him ‘something special,’” Tanya said. “I remember one time he was the running back and he ran right towards the other team but he seemed to get around them. I asked him why he did that after the game and he said ‘well one of kids was looking at his shoelaces so I knew he was not paying attention and another was looking in another direction.’ He could see those things at a younger age.”

The game continues to move in slow motion for Downs who will play in the All-American Bowl in San Antonio following his senior season. You’d be hard-pressed to find a prospect nationally that had a better junior campaign than Downs who against some of the best prep competition in the country racked up 77 tackles including 11 pass breakups, five interceptions (has 14 in three varsity seasons) with nine total touchdowns, four rushing, two receiving, two pick sixes and a kick return in leading Mill Creek to an 11-2 campaign and a spot in the state quarterfinals.

“After the season he asked a lot of his teammates where they felt like they needed to improve to be a better player,” Tanya said. “They told him what they wanted to do and he came up with workout plans and told them what they can do to get them where they wanted to go. I’m like who does that? I don’t think anyone works harder than him besides his brother and he did watch his brother a lot growing up. His brother was always the smaller one and deemed too small to do this and do that and he had to prove to everyone he was the real deal. Caleb saw how hard he worked and how he ended up and works just as hard if not harder than his brother at everything. He’s always been an old soul. He’s always acted older than his age and the way he could focus was unbelievable for his age and still is.”

“If you look into all the great people that have won, most are great leaders and you can tell by the way they talk to their team and portray themselves in videos,” Caleb said. With spring ball currently going on he goes into each practice and workout with a plan to improve one thing about his own game as well. “Learning from people that have done it before. Hard work pays off, all that type of stuff, determination, perseverance, all that stuff leads to success and you’re not going to get to where you want to be without having that in your life.”

Gary started laughing as he thought back on some of his favorite memories of his youngest child’s life.

“He had this little game called Football Men,” the elder Downs said. “The field was two feet wide and four foot long and he had like 20 of these games. He had Alabama, Notre Dame, LSU, Penn State, every college team you could think of and he’d match up Alabama vs Auburn or he might be playing 10 at the same time. You’d wake up Saturday morning and you’d forget he’s upstairs. He’d come down around lunch time and you’d say what’s going on and he’d say ’it’s halftime.’ (Gary’s laughter picks up here). You go upstairs and literally can’t walk on the floor as he’s spread out all these games. He’d leave a game up there for days at a time and come back next week and finish where he left off. He’d go outside and play and come back and finish his game. Up there all day playing Football Man games. Football has been a part of his life for a long time. That was him.”

Nearly all those schools Downs would play with ended up offering him a scholarship. He always knew this was his path and his recruiting process is winding down and the next chapter he’s relentlessly prepared for is coming fast. Downs has four crucial official visits coming up with Georgia on June 3, Notre Dame on June 10, Alabama on June 17 and Ohio State on June 24. Clemson and North Carolina are two of the other programs he’s shown strong interest in during his process.

“It’s been fun to learn about all these places, learn the differences of all these schools, learn how some schools want to use me, learn little things like why some schools don’t succeed as much,” Downs explained before going into how he believes he’ll get it down to one.

“Looking at the little things that they do. Looking at the past, what the school has done, looking at what their players are doing in the league if they’re producing in the league, if they’re doing well in life after football, after they earned their money, everyone succeeding that type of stuff. Getting involved with the players at the school, learning from them learning from what they do.”

Sports management, starting his own business, coaching (like his father who is the running backs coach at East Tennessee State), those are some of the other things that interest Downs as he thinks about his adult life.

“He understands the bigger picture,” Gary stated. “He looks at things a lot differently. He consumes knowledge and wisdom. He’s like a student of life, not just football. Football matters most to him and he’s going to make that his priority and put time into that but it’s not the only thing. He’s really humble, he’s really confident, he’s coachable.”
7COMMENTS

And we know Downs is dedicated.