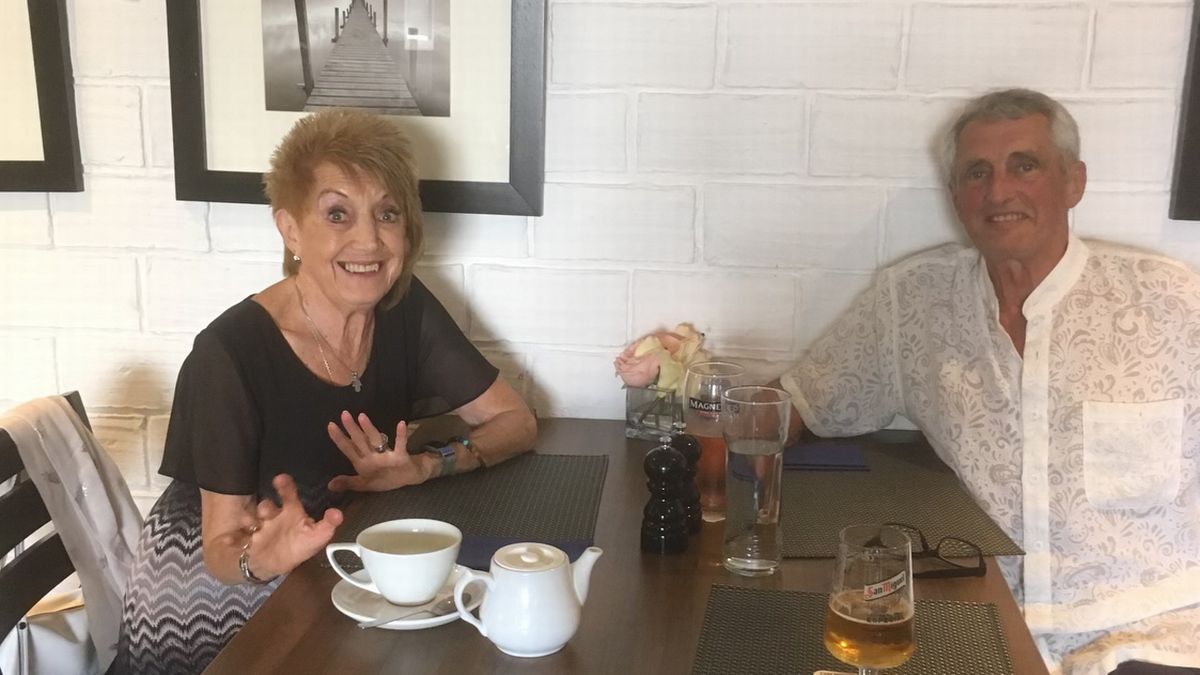 The brother of a woman murdered by her own gardener has spoken of his heartbreak after finding out a long-kept family secret.

British Lesley Pearson, 74, was strangled to death by a handyman in a row over wages and buried in a shallow grave in the garden of her luxury remote villa in Algar, Spain.

Martial arts expert Francisco Javier Becerra stuffed a handkerchief inside Lesley’s mouth and brutally murdered her before stealing cash from her wallet and hiding her body.

She was found covered in quicklime 10 days after she disappeared in July 2019 in the Andalusian village near Cadiz.

Becerra was found guilty of homocide and jailed for 12 and a half years in December last year.

The family secret came to light during the investigation when detectives took a DNA sample from Lesley’s brother Steve Ramsbottom to help identity her body.

The 74-year-old, from Lancashire, was told the devastating news that Lesley was NOT his full sister after all and that the pair had different fathers.

He said: “I was gobsmacked. Me and Lesley were so close. People always said we were like chalk and cheese, but I never in a million years expected this.

“Lesley’s body was so decomposed, the Spanish police were struggling to identify her body. As her brother and only living relative, they asked me for a DNA sample.

“But the test showed we had different fathers! I couldn’t believe what I was hearing.”

Steve and his partner Chris Salmon, 69, have spoken for the first time of the family’s loss and of the bombshell news that Lesley had a different father.

Dad of two Steve said: “I found out that my sister had been killed when a reporter knocked on my door.

“I called the police and they told me it was true and that they had a man in custody. It was her gardener, Javier.

“I was shocked beyond belief. On landing in Spain, I asked if I could see Lesley but they told me she had decomposed badly due to the climate and being covered in lime. They asked me if they could take a DNA swab to help identify her. I immediately agreed.

“The first test came back inconclusive so they had to do another one. It was two days later when the police and the pathologist sat me down in a room at the station and told me that the DNA test showed conclusively that we had we had different parentage.

“Both my mother and my father were dead by that point and there was nobody left to ask.”

Steve explained that his dad Stan had fought in World War 2 and did not return home until June 1945 while Lesley was born two months earlier on April 4.

“I know that my dad had not been home in between,” he added.

“Never in a thousand years had either of us suspected anything like this. We just didn’t put two and two together growing up and it never occurred to either me or Les.

“Lesley never had children and loved her family. She would be heartbroken to find out our dad wasn’t really her dad at all. She was a real daddy’s girl when she was a kid.

“First, I had to take in the news that Lesley was dead, then that she was murdered, and her body dumped.

“On top of that, finding out we were never full siblings was a huge blow. I was devastated. But losing a child, as I lost my son, equips a man for anything life can throw at you.

Steve recalled childhood memories of him and his sister and the differences between them.

“People often commented that me and Lesley were opposites. I was always very outgoing and sociable. I ran a chippy for fifty-five years and I get involved with the community,” he continued.

“I played international badminton for Great Britain and was very sporty. I also had a reputation for being over generous. This was the exact opposite of dear old Les.

“She was very frugal and careful with her money, she didn’t have a sporty bone in her body. We were very different people but loved each other and cared for each regardless.

“To my mind, Lesley was and is my sister and I love her dearly. It doesn’t matter what happened in the past. I have come to terms with the shock. I’m just glad Lesley never found out.

“It was a standing joke between us that Lesley was very careful with her money, we used to laugh about it. She always refused to put the heating on, and she would never go out socially.

“For her to be murdered in a row over money just breaks my heart.

“It’s some comfort to me that Lesley died without knowing the truth about her father.”

Steve and Lesley grew up in Manchester, and Steve took over running the family’s chip shop after their parents, Stan and Betty, moved to Mallorca, Spain.

He said: “Right from being children, Leslie and I were chalk and cheese. I called her ‘Lele’, and I adored her but she was completely different. She was really careful with her money, she never spent a penny. She didn’t drink or socialise much, she kept herself to herself.”

Some 30 years ago, Lesley moved to Spain with her partner Frank, and Steve and Chris visited them three times a year.

His partner Chris recalled how Lesley and Frank “had a wonderful villa and we loved visiting them.”

“We spent Christmas with them too. Frank and Steve were really good mates and we went over as often as we could.

“Steve played badminton in Spain so we’d meet up after the competitions.”

Lesley eventually settled in a villa called ‘Casa Lele’ – named after her and set in the wilderness above Algar, Spain. In 2013, Frank died following a car crash.

What crimes have been reported in your neighbourhood? Check with In Your Area.

Steve said: “Lesley missed Frank, but she trained in yoga and massage. She kept herself busy, she had a flat in Gibraltar where she spent most of her time and was still very careful with her money.”

In September 2018, a few months before Lesley was murdered, Steve and Chris flew out for what would be their last visit.

Steve said: “We took her for lunch, and Chris took our photo. Little did I know that it would be the last ever photo I’d have. In fact, the police later used that same photo to help identify Lesley from her jewellery.

“It wasn’t a good visit, Lesley drove me mad, she was really snappy, and as we drove away, I said to Chris: ‘I’m not going to visit her again.’

“It was said in anger, and I had no idea of what was to come in the future.”

In July 2019, Lesley was reported missing after she failed to return a hire car, before a trip to Gibraltar. Ten days on, Steve and Christine learned that she was dead.

Chris added: “It was a huge shock. It was so difficult to get information because she had died in Spain. We had a meeting with Spanish police, arranged by the embassy, and they told us she had been murdered.”

Lesley’s body was found in a shallow grave in the grounds of her home in Algar, Spain. Her handyman, Francisco Javier Becerra, was charged with her murder, which was thought to be motivated by a row over money.

Becerra had covered the body with quicklime to accelerate decomposition so that the body could not be identified.

Steve said: “I had to give them our last photo, so she could be identified through her jewellery.

“After DNA tests, I discovered that Lesley and I had different fathers. Lesley was the result of an affair, which nobody at all knew, except of course my mum, who was by now deceased. It was shocking.”

In December last year, Becerra admitted murdering Lesley and was jailed for 12 years by a Spanish court. He claimed he had lashed out at Lesley and strangled her in a row over his wages.

He had falsely claimed to villagers she had sold her home to a Romanian family and he had started selling off her things.