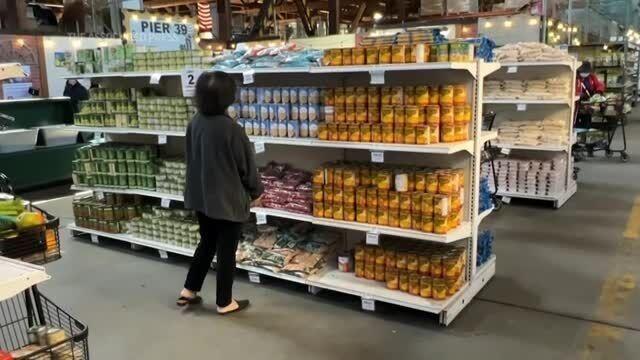 WASHINGTON — Inflation soared over the past year at its fastest pace in more than 40 years, with costs for food, gasoline, housing and other necessities squeezing American consumers and wiping out the pay raises that many people have received.

The Labor Department said Tuesday that its consumer price index jumped 8.5% in March from 12 months earlier, the sharpest year-over-year increase since 1981. Prices have been driven up by bottlenecked supply chains, robust consumer demand and disruptions to global food and energy markets worsened by Russia’s war against Ukraine. From February to March, inflation rose 1.2%, the biggest month-to-month jump since 2005. Gasoline prices drove more than half that increase.

Across the economy, the year-over-year price spikes were widespread. Gasoline prices rocketed 48% in the past 12 months. Used car prices have soared 35%, though they actually fell in February and March. Bedroom furniture is up 14.7%, men’s suits and coats 14.5%. Grocery prices have jumped 10%, including 18% increases for both bacon and oranges.

Investors focused on a bright spot in the report and sent stock prices up: So-called core inflation, which excludes volatile food and energy prices, rose just 0.3% from February to March, the smallest monthly rise since September. Over the past year, though, core prices are up 6.5%, the most since 1982.

“The inflation fire is still out of control,” said Christopher Rupkey, chief economist at the research firm FWDBONDS LLC.

The March inflation numbers were the first to fully capture the surge in gasoline prices that followed Russia’s invasion of Ukraine on Feb. 24. Moscow’s attacks have triggered far-reaching Western sanctions against the Russian economy and disrupted food and energy markets. According to AAA, the average price of a gallon of gasoline — $4.10 — is up 43% from a year ago, though it’s dipped in the past couple of weeks.

The acceleration of inflation has occurred against the backdrop of a booming job market and a solid overall economy. In March, employers adding a robust 431,000 jobs — the 11th straight month in which they’ve added at least 400,000. For 2021, they added 6.7 million jobs, the most in any year on record. In addition, job openings are near record highs, layoffs are at their lowest point since 1968 and the unemployment rate is just above a half-century low.

The escalation of energy prices, a potential threat to the economy’s long-term durability, has led to higher transportation costs for the shipment of goods across the economy, which, in turn, has contributed to higher prices for consumers. The squeeze is being felt particularly hard at the gas pump.

“That’s an extra dollar per gallon that I’m paying to get into the city to work,” Jason Emerson of Oakland, California, said as he loaded groceries into his car. “And then, you know, we have the tolls that just went up this past year a dollar. My eggs are a dollar more as well. So everything’s going up at least a dollar, which, you know, adds up.’’

The latest inflation numbers solidify expectations that the Federal Reserve will raise interest rates aggressively in the coming months to try to slow borrowing and spending and tame inflation.

Kathy Bostjancic, an economist at Oxford Economics, said she expects year-over-year inflation to hit 9% in May and then begin “a slow descent.” Some other economists, too, suggest that inflation is at or near its peak. With federal stimulus aid having expired, consumer demand could flag as wages fall behind inflation, households drain more of their savings and the Fed sharply raises rates, all of which could combine to slow inflation.

But that could take time. Robust spending, steady pay raises and chronic supply shortages are still fueling inflation. In addition, housing costs, which make up about a third of the consumer price index, have escalated, a trend that seems unlikely to reverse anytime soon.

Economists note that as the economy has emerged from the depths of the pandemic, consumers have been gradually broadening their spending beyond goods to include more services. A result is that high inflation, which at first had reflected mainly a shortage of goods — from cars and furniture to electronics and sports equipment — has been emerging in services, too, like travel, health care and entertainment. Airline fares, for instance, have soared an average of nearly 24% in the past 12 months. The average cost of a hotel room is up 29%

The expected fast pace of the Fed’s rate increases will make loans sharply more expensive for consumers and businesses. Mortgage rates, in particular, though not directly influenced by the Fed, have rocketed higher in recent weeks, making home buying costlier. Many economists say they worry that the Fed has waited too long to begin raising rates and might end up acting so aggressively as to trigger a recession.

The American public’s expectation for inflation over the next 12 months has reached its highest point — 6.6% — in a survey the Federal Reserve Bank of New York has conducted since 2013. Once public expectations for inflation rise, they can be self-fulfilling: Workers typically demand higher pay to offset their expectations for price increases. Businesses, in turn, raise prices to cover their higher labor costs. This can set off a wage-price spiral, something the nation last endured in the late 1960s and 1970s.

Inflation, which had been largely under control for four decades, began to accelerate last spring as the U.S. and global economies rebounded with unexpected speed and strength from the brief but devastating coronavirus recession that began in the spring of 2020.

Many Americans have been receiving pay increases, but inflation has more than wiped out those gains for most people. In February, after accounting for inflation, average hourly wages fell 2.7% from a year earlier. It was the 12th straight monthly drop in inflation-adjusted wages.

Still, for now, with the job market healthy, inflation has yet to dampen overall consumer spending. Levi Strauss & Co., for example, says its price increases don’t seem to have fazed its customers.

That said, Adrian Mitchell, chief financial officer at Macy’s, cautions that chronically high inflation will likely lead consumers to be choosier: They may spend less on department store goods and more on services like travel and dinners out.

In Atlanta, Shirley Hughes has had to raise prices at her bakery, Sweet Cheats, because of soaring costs for items like eggs and milk. Two years ago, a 36-pound container of butter cost $75. Now, it’s $145. Thirty dozen eggs were $50. Now, they’re $75 — and even that price is possible only if Hughes picks them up herself, instead of having them delivered. She’s raised the price of her six-inch cake by $5 to $50.

So far, she said, people have generally accepted her higher prices. But there are limits. One customer wanted a six-inch cake delivered to her boyfriend — an hour’s drive away. Hughes told her the price of making the cake and delivering it would come to nearly $200.