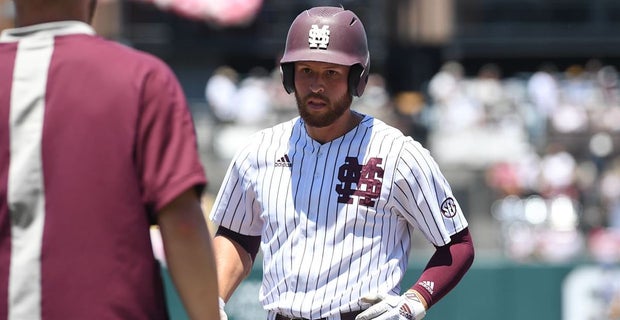 Throughout the SEC baseball season, no result has been as shocking as what took place in Lexington, Ky., last weekend. No. 1 Tennessee went down in the first two games to drop its first series of the campaign, and it came against the team placed dead-last in these rankings last week. Kentucky had a couple of good home series wins against TCU and Georgia previously, but this still came out of nowhere as the Wildcats had dropped their previous five SEC sets.

Kentucky remains a long shot to make the NCAA Tournament, although its hopes are not completely gone. Likewise, Ole Miss and Florida completed badly needed sweeps of Missouri and Mississippi State, respectively. And Vanderbilt — while not desperate from the perspective of making regionals — bounced back from one of its roughest weeks of the season to earn a resume-boosting series win at Georgia that revitalizes the Commodores’ hopes of hosting.

Combine all of those factors and it was probably a good weekend overall for the league’s collective postseason positioning. These teams’ stocks were tanking for a reason, however, and they will need to continue playing well this weekend.

Get the fastest scores, stats, news, LIVE videos, and more. CLICK HERE to download the CBS Sports Mobile App and get the latest on your team today.

The Tigers’ season is effectively over after they missed a big chance at Ole Miss last weekend. While it was a positive step forward this spring in a number of ways, Mizzou still has a long way to go as it looks to become a competitive program in the SEC.

Credit Mizzou for taking care of business at home with SEC series wins against South Carolina, Mississippi State and Kentucky. But the Tigers have not won a league series on the road and, in fact, have been swept in all four so far. That’s right — Mizzou has not won a single SEC road game this spring in 12 attempts.

Woof. That was a brutal performance by State in a must-win home series against Florida. The Bulldogs fell flat on their faces against the Gators in an ignominious sweep at Dudy Noble Field, their RPI dropping to No. 102 as a result.

It is bizarre to say, but State is going to miss the NCAA Tournament altogether after winning the College World Series last year. Surely this would not have happened if the Diamond Dawgs had stayed healthy — Landon Sims’ elbow injury is at the top of the list of unfortunate occurrences.

It was not too long ago that Alabama was in the top five of these rankings. The Crimson Tide looked dangerous heading into Tennessee one month ago, won the first game in Knoxville and then has not been the same since.

Now Alabama is actually at serious risk of missing the SEC Tournament altogether. The Tide holds a one-game lead over Kentucky and Mississippi State, both of whom are ahead of Mizzou. But Bama has a brutal schedule to finish things off with a road trip to Auburn followed by the final home series against Arkansas. It would not be a shock for Alabama to go 1-5 in that stretch.

Carolina continues to struggle on the road, although it did salvage the final game of its series at Texas A&M. With final series remaining against Kentucky and Florida, it seems that the Gamecocks are in good position to win enough games to sneak into the SEC Tournament.

Once they get to Hoover, the prospects probably aren’t great. This could be an interesting offseason for one of the SEC’s proudest programs as athletic director Ray Tanner — former national championship-winning head coach of the Gamecocks’ baseball team — will have a decision to make.
10. Kentucky Wildcats (26-21, 9-15)
(Photo: Sarah Caputi/ UK Athletics )

Well, well, well. Kentucky takes a massive leap after upsetting Tennessee, and the Wildcats were even competitive in the lone game of the series that they lost. It was odd to see the Volunteers fighting to avoid a sweep on Saturday. Kentucky is not altogether out of the NCAA Tournament picture yet, either.

UK’s No. 58 ranking in the RPI needs to improve, but it will have chances to bump up that number. A road series against South Carolina is tough but winnable, then the Wildcats host Auburn to finish out the season. A lot will depend on what the Cats can do in Hoover, Ala., at the SEC Tournament, but they will need to win at least four or more likely five of their final six SEC games. Tall order, but if they play like they did against Tennessee then it is possible.

Ole Miss really needed that sweep against Mizzou and remains alive as it seeks a regional berth. At No. 56 in the RPI, a lot of work remains to be done. A brutal schedule to finish will give the Rebels a chance though if they can keep winning.

There is probably some margin for error here as well if Ole Miss can beat Southern Miss on the road Tuesday. A split against LSU and Texas A&M is absolutely mandatory, and the Rebels might need to win four of six games. The track record of 13-17 SEC teams getting into the NCAA Tournament is not great.

Florida should have enough of a resume to comfortably get into the field of 64 thanks to series wins against Arkansas and Miami to go with a great RPI of No. 12. On top of that, the Gators get Missouri and South Carolina to finish the regular season. Dropping the ball against those two would perhaps cause issues, but more likely Florida should be able to get to 14 or 15 SEC wins at least, which would guarantee selection when combined with its overall body of work.

This isn’t one of coach Kevin O’Sullivan’s best teams by any stretch, but the Gators have enough talent to jump up and win a regional even with Hunter Barco out for the season. They will be hungry after last season’s regional debacle.

On one hand, Georgia put up 22 runs against Vanderbilt’s deep pitching staff over three games last weekend. On the other, all of those runs were confined to the first two games of the series and the Bulldogs could not really hold down a lineup that had been struggling lately.

The series loss could hurt UGA’s seeding in Hoover as well as its chances of earning a national seed in the NCAA Tournament. The Dawgs are still on track to host regionals though. Pitching depth will be a big concern for the postseason, and this still feels like a team that is not quite as good as its record. That showed last weekend.
6. Vanderbilt Commodores (31-15, 12-12)
Vanderbilt catcher Dominic Keegan (Photo: Vanderbilt Athletics)

Entering last weekend, Vanderbilt had not won a series against an SEC team that owned a winning record in league play. Thus, winning two out of three at UGA really bolsters the Commodores’ resume although they did sustain a couple of injuries in the process.

This sets up an intriguing showdown at Arkansas this weekend. Vanderbilt has the pitching depth to make things interesting in Fayetteville, but it might not have the lineup quality from top to bottom to hit with the Hogs. If the ‘Dores can pull the upset and win that series, they could be back in the hosting conversation. Dominic Keegan is one of the hottest hitters in all of college baseball right now.

While Auburn has still had an excellent season so far and could play deep into June, the Tigers showed over the last two weeks that they are not quite among the SEC’s elite. Winning one game out of three at Tennessee was perfectly respectable, but then Auburn lost a home series to Arkansas. Again, that’s nothing to be ashamed of. But to be considered in that top tier, the Tigers needed to win one of those series.

Hosting a regional is close to a sure thing at this point. A national seed remains in play as well. The pitching could do with some improvement, although it will look better once Auburn gets into the postseason and isn’t dealing with the every-weekend grind that is the SEC.

Not a ton to say as LSU won its third straight SEC series as expected by taking two out of three against Alabama. That will not do much for its postseason resume, and the Tigers could probably use one more quality series win. The only chance for that will be at Vanderbilt to end the regular season.

The statistical indicators all look good and appear to point toward a long postseason run. LSU is third in the SEC in league-only ERA, fourth in runs scored; a No. 12 ranking in fielding percentage is a bit of an issue, though. Arizona transfer Jacob Berry has been as-advertised, and Dylan Crews is raking as well. The bullpen is one of the nastiest in college baseball.

After a slow start, Texas A&M should probably be considered one of the top five-to-seven contenders to win the CWS. The Aggies have now won five straight SEC series, including road sets against Georgia and Vanderbilt on top of winning a home series against Arkansas. The offense leads the SEC in runs scored, while the pitching is more than respectable.

It looks like coach Jim Schlossnagle is going to guide the Aggies to a national seed in his first year on the job, which would exceed preseason expectations by quite a bit. This is a program that continues to trend upward.

Real nice series win for Arkansas at Auburn. The Tigers had not lost a home series since March, but the Razorbacks showed why they remain one of college baseball’s elite teams. Over the course of a long season, even the best teams generally are going to lose well over 10 games. Arkansas is right where it needs to be heading down the stretch even though it has not been as dominant as in past regular seasons.

The Hog Pen will be rocking this weekend when Vanderbilt comes to town for a matchup between two of the sport’s premier programs.

It is difficult to ding Tennessee for dropping a road series against a respectable team like Kentucky that has been tough at home. With how the Vols have rolled through this season, it is understandable that they might have trouble maintaining 100% focus for an entire 60-game slate prior to the NCAA Tournament.

Granted, it does seem that the early offensive explosion was unsustainable. The Vols merely have a very good-to-great lineup rather than an all-time one. No one can top Tennessee’s pitching, however. That is going to carry Big Orange deep into the NCAA Tournament and quite possibly to a national championship. Coach Tony Vitello’s crew rightfully remained No. 1 in the national polls — voters overreacting to one series would have been silly.