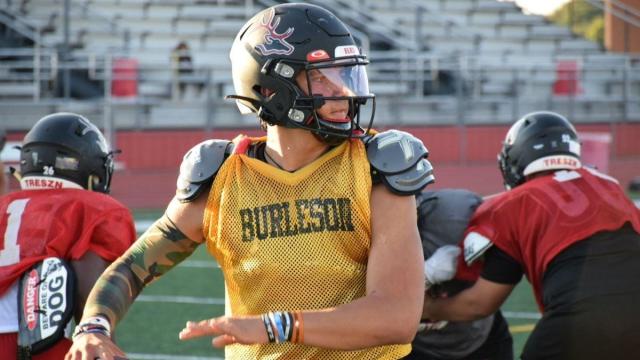 The Top247’s No. 1 prospect Dylan Raiola announced his commitment Ohio State on Monday evening. Earlier in the today 247Sports was on-hand for a spring practice at Chandler (Ariz.) High where the five-star rising junior flashed the traits that made him so coveted.

Several reps from the workout can be viewed in the video above.

Raiola is commit No. 1 for head coach Ryan Day and his staff in the 2024 process. He chose the Buckeyes over an offer list that included Alabama, Georgia, Oregon, Texas and USC.

The 6-foot-3, 225-pound Raiola threw for 3,341 yards and 32 touchdowns with another nine rushing scores as a sophomore at Burleson (Texas) High and is quickly settling into his new digs within the Chandler program.

“Looks the part already from a physical standpoint,” Singletary wrote in his evaluation. “Two-sport athlete who also plays baseball and has a nice athletic profile. Well-proportioned build and frame. Sturdy lower body that generates power and velocity on throws. Displays encouraging athleticism that should continue to improve as he develops throughout his career.

“Good stature in the pocket with a smooth easy release. Raiola has above average mobility and is able to buy time while locating his receivers and going through progressions smoothly. Flashes plus arm strength to make the throws from a variety of arm angles with velocity or touch as required. Puts zip on passes even when on the move out of the pocket.

“Willing to stand in the pocket and deliver passes while under pressure. Keeps eyes downfield as the pocket closes. Doesn’t get caught looking at the rush. Features good touch on his deep passes enabling receivers to run underneath to make the catch. Displays good pocket presence and awareness. Capable of tucking the ball to run if needed to gain chunk yardage.

“A young player who has very few holes in his game even with two more years of high school left. Ahead of the curve mechanically and possesses the arm strength that puts him in elite company. The more he plays and has reps his decision making and feel will only get faster and become second nature. Should become a Power Five starter for multiple years and a potential all-conference selection with NFL Draft early-round upside.”