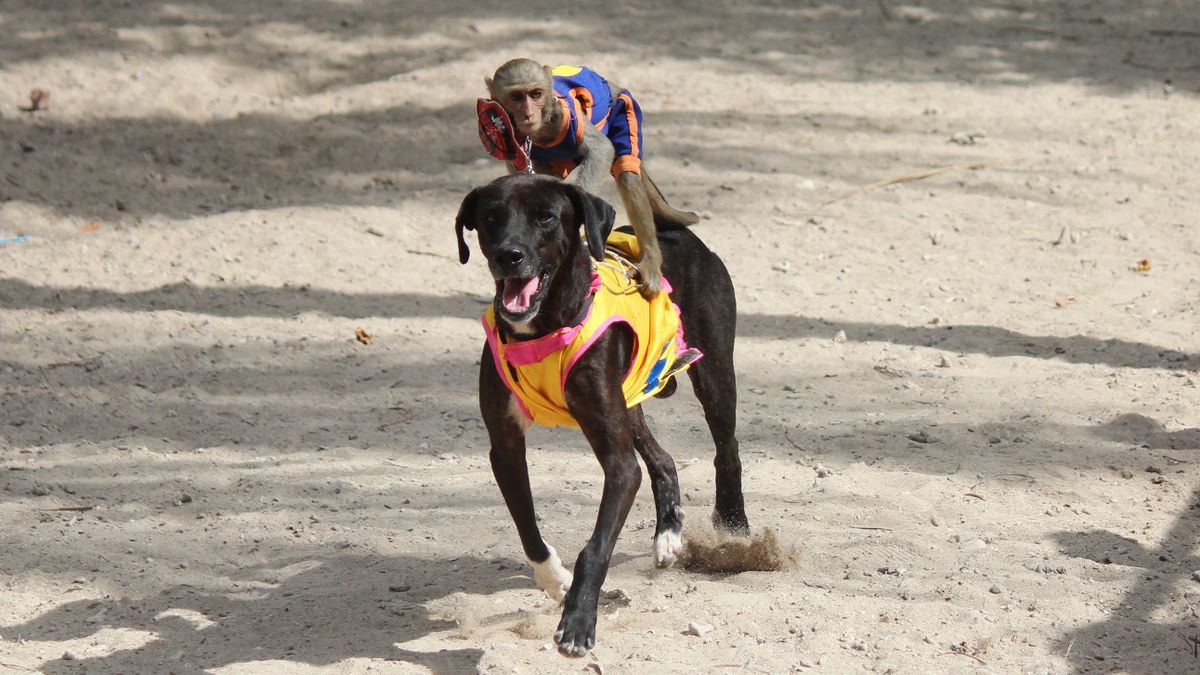 Monkeys are being forced to ride dogs and motorbikes at a twisted resort called ‘Monkey Island’, branded ‘horrific’ by an animal welfare charity.

The monkeys are even entered into swimming races on the island, where bears and other animals are paraded in front of the crowds.

Anti-cruelty group Animals Asia sent The Mirror shocking images of the abuse, which it says is still ongoing.

Dave Neale, animal welfare director at Animals Asia, told The Mirror: “Monkeys ride tiny motorbikes around a track. They are put on the back of dogs and the dogs are raced.

“They also get the monkeys to race in a swimming pool. They put food at one end and these monkeys swim across.

“Bears are also used for performances, they ride motorbikes or normal bicycles.

“I’ve been to the resort a few times. It’s horrific. It’s an abusive place. You can see the animals are fearful of the trainers in the arenas. They are brandishing sticks.

“We know they hit them in training as you can see the reaction in the animals. They give the animals threatening looks and show them the stick.

“From a young age they have been intimidated by trainers to perform these tricks. To get them to sit on a motorbike must take quite a lot of domination.

“Eventually they do it as they know they’ve received some physical punishment for not doing it in the past.”

Mr Neale, 49, from Coventry, said the circus on Monkey Island, which sits off the coast of the city of Nha Trang, is free of charge to visitors.

He added: “People don’t pay to watch the circus. They pay to stay on the island and these shows happen around them.

“We’ve reached out to the owner, Long Phu Corporation, to talk about the circus as we can offer homes to some of the animals. They are just using it as something to attract people to the island.

But we haven’t had any response back so far.”

Mr Neale said he went behind the circus stage after one show and found the animals held in cramped cages.

He added: “That was difficult to deal with. They are in that situation for 23 hours a day.”

He slammed the circus as a stain on the island, which is known for its golden beaches and wild monkeys.

The island is popular with Vietnamese people, as well as Russian and Eastern European tourists.

Visitors have left positive reviews about the island online, celebrating its beauty.

Some even said they enjoyed the twisted circus shows, however others condemned the abuse, with one person branding the destination ‘torture island’.

The reviewer wrote: “Trip is appropriate only for people that do not feel empathy for animals. It is essentially torture island circus.”

Another review said: “I am still haunted by what I saw here, blatant animal cruelty.

“The free roaming monkeys seem ok but they are putting on animal shows, races where the petrified animals are basically being hit to perform.

“I walked off in the end as couldn’t watch after they made a traumatised dressed up bear ride a motorbike.

Monkey Island is just one of several circuses in Vietnam where animals are forced to perform ridiculous stunts in front of crowds.

Similar abuse takes place at the nearby Hoa Lan resort, which is also owned by the Long Phu Corporation, according to Animals Asia.

One shocking image shared by the anti-cruelty group shows a muzzled bear driving a toy buggy at the circus in Hoa Lan.

He added: “Hong Loc circus is quite famous in Vietnam. They rock up in small towns and districts and put on shows for a few weeks and then move on.

“They have bears, monkeys and even a crocodile. We have seen bears and monkeys at Hong Loc riding on bicycles.

“Bears will also lie down with their paws in the air and twirl these cylinders.”